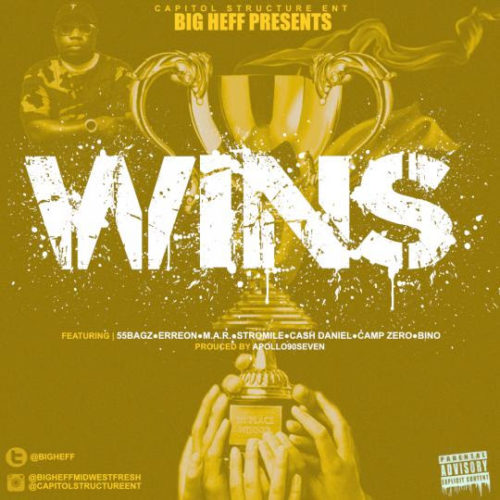 Wins was put together by Quincy “Big Heff” Taylor while on the Westcoast in the midst of his second quarter 2019 Streets Most Wanted Tour. The track features an all-star cast of artists from that tour as well as a guest artist. While visiting Ultrium Studio in Los Angeles, Heff linked all of the artists for a creative session and the rest was history.

In 2010 Quincy Taylor created the Big Heff Industry Tour, it’s a quarterly artist awareness tour that helps break new singles and artist. This allowed him to develop new markets for his clients with extensive retail promotion, tastemaker events, radio interviews, and concert performances that has allowed Quincy to have nonstop continuous growth for all of this businesses and clients. The tour has evolved into the Streets Most Wanted Tour. In 2011 Quincy was appointed as the Vice President of “Nerve DJs”, a midwest based DJ group specializing in radio, club, online promotions, and building relationships between artists, music, and DJs.

In 2014 Quincy “Big Heff ” Taylor joined the team with Def Jam Records as the Ohio Valley Region Rep. working on projects in the Midwest Region. In 2015 he created the Big Heff Radio Show which is now syndicated on 9 different stations and he created a partnership for the Midwest Connext TV Show a video countdown music program which highlights Midwest music.

Wins, produced by Apollo90Seven, is Big Heff’s first track as an artist as is released under Capital Structure Entertainment. Erreon Lee, Camp Zeroo, 55 Bagz, M.A.R., Stromile, Cash Daniel and Bino are all featured on this collaboration. The single is now available on all streaming platforms.

Keep up with Big Heff and the Streets Most Wanted Tour on social media: